With the 2023 FIFA Women's Cup now less than 500 days away from kick-off, many of Australia's players and executives came together to commemorate the milestone, and discuss what it means to host the world's largest female sporting competition.

Amongst those involved in the Sydney Harbour event was Commonwealth Bank Matildas' midfielder Chloe Logarzo, who is on track to return from a serious ACL injury and stake her claim as a member of Tony Gustavsson's squad.

Having been a part of the celebrations that ensued after Australia/New Zealand were announced as FIFA Women's World Cup hosts, the 27-year-old remains stunned at how quickly the tournament seems to be approaching.

It's crazy to think that there's only 500 days to go, before I can represent my country in our homeland on the world stage.

"It's always a dream to come home from overseas and play here, but to do it at a world cup, to inspire the next generation, it's something that I would've never been able to imagine growing up."

The growth of the Commonwealth Bank Matildas and Australian women's football has been a whirlwind for Logarzo, who has been involved with the national side throughout their dramatic shift into the national spotlight.

The 2023 FIFA Women's World Cup may well be the greatest legacy that the side can imprint on the next generation, with Logarzo and the players well aware of it's impact.

"For me, and I think, any footballer, we always want to come into the sport and leave it better than the way we found it."

"This will just be the starting point for us. We want to inspire the next generation as well as inspiring a nation.

"Leaving that lasting legacy after the tournament means that we're going to create better pathways for the future for females coming through.

"It's incredible to see how far we've already come in the last five years." 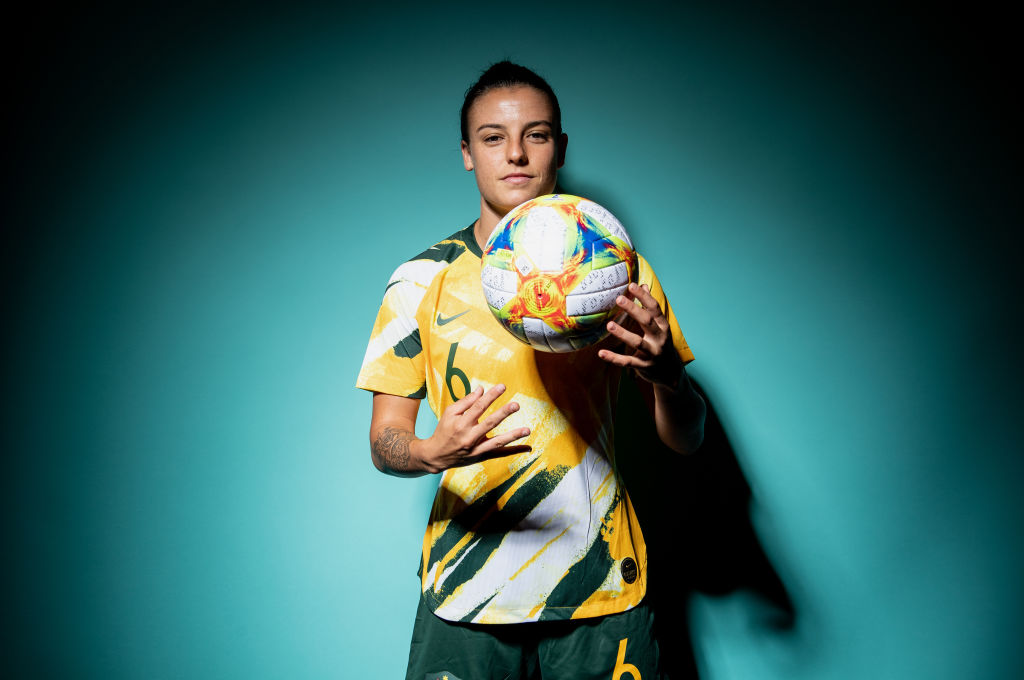 "When I was a kid, I didn't have any pathways, we were just playing with the boys. There weren't any opportunities for us to be able to make a living playing football," Logarzo explained.

"I want to inspire the next generation to know that they can grow up to be professional athletes, have an income, and be able to solely work as an elite athlete."

One of those heavily involved in the 2023 FIFA Women's World Cup preparation, is the tournament's Chief Operating Officer Jane Fernandez, who was in attendance for Monday's milestone celebration.

Fernandez, along with Logarzo has confidence in the legacy that the landmark tournament will create, not just for football in Australia, but across the world.

"We are on track, the excitement and the momentum is building. 500 days to go until we deliver the biggest ever FIFA Women's World Cup. It really will be a women's world cup, that inspires everyone to go beyond greatness," she said.

"This tournament on our shores will grow participation along with amplifying women's football right across the world.

"It's going to have an unbelievable impact on not just Australia and New Zealand, but also the Asia Pacific region, it's going to empower women there too.

"We have already got seven teams (Philippines, Vietnam also playing their first WWC) from those regions that have qualified for the FIFA Women's World Cup in 2023.

"We just cannot wait to start working with all of these unbelievable multicultural communities that we have here in Australia and New Zealand, to really help amplify the events."

“Today is an incredibly exciting day for Australian football and indeed the world. In 500 days' time, we will welcome the world to our shores for the FIFA Women’s World Cup™ and we cannot wait.”

“We know that this tournament will take women’s football to another level, and we are committed to leveraging it to escalate the growth of women’s football in Australia.  Through Legacy ‘23 we will deliver meaningful change including 50/50 gender participation, greater female representation in leadership roles and greater access and pathways at all levels of the game.”

NSW Minister for Women, The Hon. Bronnie Taylor, couldn't help but soak up the anticipation of the upcoming tournament, which will see our female role models take the nation by storm in 2023.

I think it is absolutely amazing. Speaking to all of these young girls today and hearing how it inspires them. That is the really important message from today

"To have Chloe Logarzo here, talking to these young women, talking to them not just about what it's like to play for Australia, but also just the love of the game," she said.

Minister Taylor understands the impact that sporting influencers have on how women in Australia interact with not only football, but all sport.

For her, the legacy of a FIFA Women's World Cup on home soil will be how it paves the way for a greater appetite in women's sporting competition and health.

You can feel the importance, what it means to watch these incredible athletes. I think we are in for a huge future in women's sports after 2023.

"I think we've got an incredible moment in time to capitalise on the love of sport, the love of women's sports and the conversation around having equal pay for women. To bring this competition to our shores and allow so many more people to see our girls inspire," Minister Taylor continued.

"I think that's really important because we know that even if you're not going to go on to a football career, we still want you to be inspired to enjoy sport. It's not only great for your physical health, but terrific for your mental health as well."