What's on in November?

The return of the Socceroos on home soil, the Commonwealth Bank Matildas playing two massive games vs USA in Sydney & Newcastle & the FFA Cup Round of 32 continuing headline what's coming up in November!

Check out all that's happening and the key dates to be aware of below. 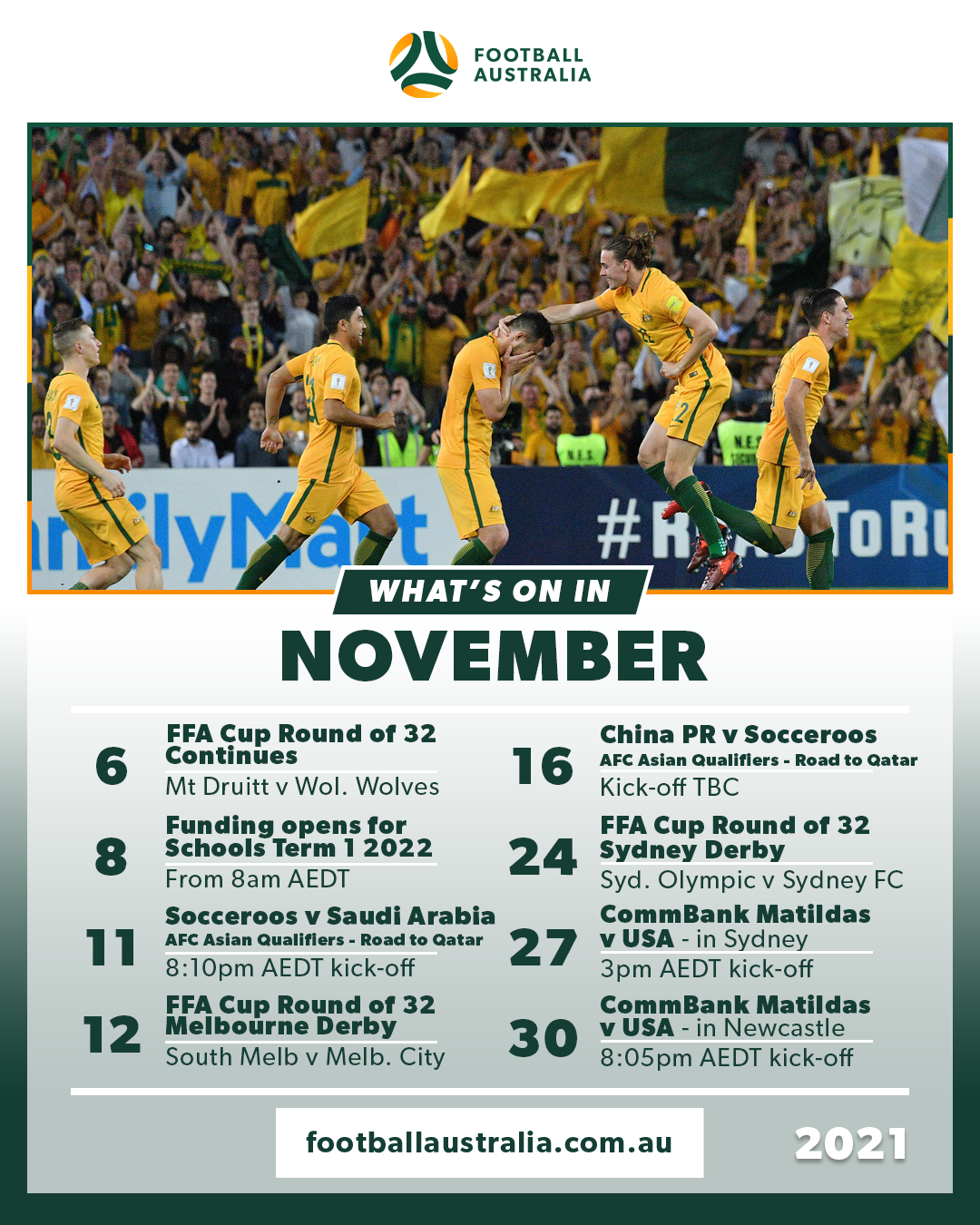 The Socceroos return after two years

With four games played, the Socceroos are approaching the halfway point of their round three FIFA World Cup qualifiers - and after over two years playing abroad, they're finally coming home!

October saw Australia make history with an 11th-straight win against Oman, before the world-record streak came to an end following a tight defeat away in Japan.

The results mean Graham Arnold's side sit in second spot of Group B - with the Samurai Blue hot on their heels and a massive meeting with ladder-leaders Saudi Arabia on the cards.

The Socceroos will take on Saudi Arabia at Western Sydney Stadium in Parramatta on Thursday, 11 November 2021, some 763 days after the team’s last match in front of home fans against Nepal in Canberra in October 2019.

In next month's second fixture, taking place on the famous date of November 16 - 16 years on from the storied night Australia qualified for its first World Cup in 32 years - the Socceroos will take on China PR away from home.

The two sides last met in their opening match of Round 3, where goals to Awer Mabil, Martin Boyle and Mitch Duke sealed a 3-1 victory for the Green and Gold. 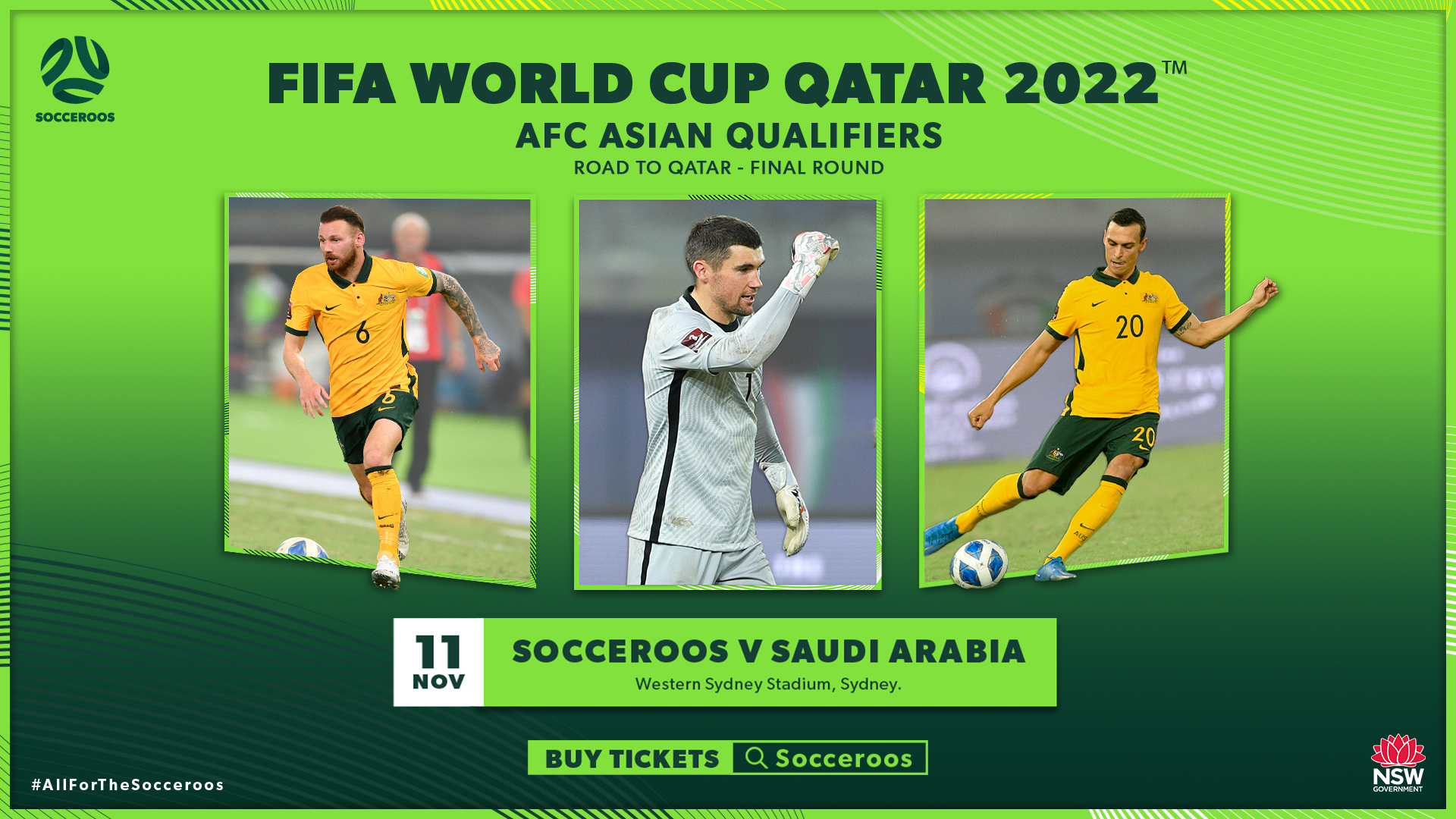 A month after their thrilling two-game series against Brazil in Sydney, the Commonwealth Bank Matildas will return to Australia once again for two massive games against the United States in NSW.

Australia will take on the reigning World Champions at Stadium Australia on Saturday, 27 November 2021, before traveling up north to Newcastle for game two on Tuesday, 30 November 2021 at McDonald James Stadium.

And general public on-sale will be Tuesday, 9 November.

Make sure not to miss this one, with the world #1 ranked side coming to our shores. 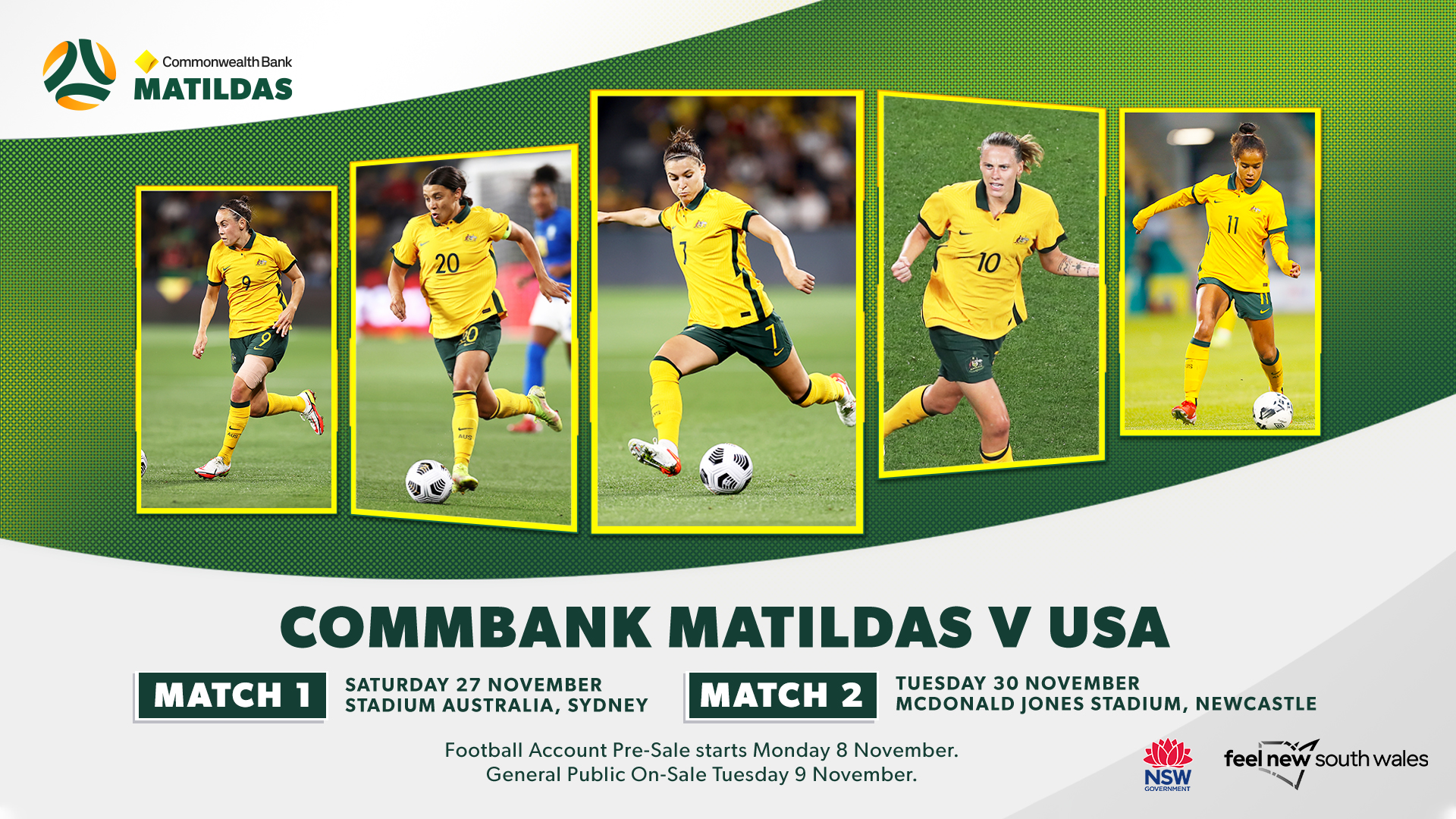 FFA Cup Round of 32 continues

The FFA Cup 2021 Round of 32 continues on Saturday, 6 November 2021 when the first of the matches scheduled for NSW, ACT, and Victoria take place.

Popondetta Park is the venue as Mount Druitt Town Rangers welcome Wollongong Wolves for a spot in the Round of 16, with every second live & free on 10 Play.

There are several more games scheduled for November across NSW and Victoria, headlined by South Melbourne FC taking on Melbourne City on Friday, 12 November and Sydney Olympic hosting Sydney FC on Wednesday, 24 November.

See below for all of the current fixtures locked in.

Note: Details are subject to change*

The FFA Cup Play Offs are locked in

The FFA Cup 2021 Final Rounds Play Off matches between Western United FC and Newcastle Jets & Perth Glory and Melbourne Victory will be played alongside Round of 32 matches in November.

With restrictions easing across Victoria and New South Wales, both Play Offs have been locked in starting with Western United FC and Newcastle Jets on Saturday, 13 November at GMHBA Stadium in Geelong, with a kick-off of 7:45pm AEDT.

The winner of the match will advance to the Round of 32, where they will face Wellington Phoenix FC for a spot in the Round of 16. Details for that match will be confirmed after November 13, with hosting rights going to Western United FC or Newcastle Jets.

Meanwhile, Perth Glory will face Melbourne Victory on Wednesday, 24 November in Adelaide, due to the border restrictions between Western Australia and Victoria. The venue for that clash will be Marden Sports Complex, with a kick-off of 7:30pm local (5pm AWST, 8:00pm AEDT).

The winner of Glory and Victory will then face Adelaide City in the Round of 32, with City hosting A-League opposition in what they hope will be a repeat of their 2014 Cupset in the competition (a 1-0 win over Western Sydney Wanderers).

You can watch every second of the FFA Cup live & free via 10 Play.

As we approach the end of 2021, planning already begins for 2022 and the funding for football programs in schools opens on Monday, 8 November from 8am AEDT, and is open until 4pm on Friday, 19 November.

Football Australia is proud and excited to deliver quality football programs at schools around the country in a safe and educational environment.

Football Australia school programs can be run before, during and after school and are available for all primary schools and high schools. Our qualified workforce of over 200 coaches will come with everything they need for the kids to have fun and learn some new skills.

Your school can engage in Football Australia’s school offerings in two ways:

Stay tuned to the Football Australia social media channels for more information on the funding window or contact schools@footballaustralia.com.au to find out more.

On top of all of the National Teams & FFA Cup action, the 2021/22 A-League Men's season also kicks off in November.

Fans can watch the Men's and Women's competition this season on Paramount Plus, with one game per week in each comp broadcast on free-to-air TV.