The Kerrs: "It’s so much pride and yet she’s just my granddaughter"

On the afternoon of February 7, 2009, Sam Kerr jogged out onto a patchy football field in Canberra to earn her first “A” international cap for Australia in a friendly against Italy.

Ten years later – and against the same opponent – Kerr captained the Westfield Matildas in their opening group game of the 2019 Women’s World Cup.

A lot has changed for Kerr, for the Australian women’s national team, and for women’s football around the world in those ten years. But someone who has been a constant throughout it all – from that modest Canberra crowd to the sold-out stadiums of France – has been her grandmother, Coral.

Just over 50 years ago, Coral and her husband migrated from India to Australia in search of a better life. She didn’t know it then, but Coral’s decision has had ripple-effects far beyond what she imagined when she settled into her new home in the West Australian port city of Fremantle. Because in doing so, Coral changed the course of Australian football forever.

Indeed, it’s fitting that the woman who now captains the Westfield Matildas is the grand-daughter of migrants; a true reflection of the multicultural nation the team represents.

READ: A Nation in a Name: Dianne Alagich

WATCH: Generations of Australians - The Sainsburys

Recounting her story for the Westfield Matildas’ “Generations Of Australians” series, Coral highlights the sliding-doors moment that could have changed it all for Kerr and for the team she now leads.

“I think that we made a fantastic choice in coming to Australia because we were originally booked to go to England,” Coral said, “but the doctor said my husband wouldn’t make it because of the weather; it’s too cold. So then we applied to come here. It’s just great. My husband just loved it, he thought it was absolutely marvellous.

“At that time, all the Anglo-Indians were leaving: some to Canada, some to England. We sent my younger sister to England because her passport was about to expire and we were going to follow, but we never followed. So she stayed over there – she’s been there for sixty years – and we’ve been here just over fifty.

We were accepted to Australia and we came here. The rest is history, really.”

Like many newly-arrived migrants, Coral had a difficult time fitting into her new city and its culture. But with the passing of time and the help of some compassionate locals, she soon found her feet.

“I came here and I used to cry all the time because I’d never ironed anything, I’d never cooked,” Coral said.

“Safe to say that for at least six months, we lived on ham and eggs because I would go to the butcher and wait for everyone to leave the shop and say, ‘excuse me, could you tell me what that is? Could you tell me how to cook it?’

“I’d go home and cook it [but] nobody could eat it; out would come the ham and eggs! It was funny because it was a Sunday afternoon and I’d cooked a dish of ham and eggs and it was on the table and my husband took a photograph and sent it to my mother and said, ‘can you believe Coral cooked us lunch?’

“The house we rented had no washing-machine in it, so we had to go to the laundry. The land-lady lived just at the back of us – she was a little Ukrainian lady – and she saw me hanging out the clothes and came and said, ‘mama, not like that; that’s not how you hang the clothes.’

"I was just throwing them on the line and putting pegs [on]. She had to show me how to hang clothes on the line. It was so funny having to learn to use the gas stove and heaters.”

Coral remembers watching Sam discover her sporting talents, playing Aussie Rules, netball and football with her cousins and brother, Daniel. Even then, she knew Sam had something special.

“She was always very athletic,” she said. “She played netball and football and she just excelled in whatever she did. Then she went into soccer when she was 12, and it’s all been a great story since then.

“I kicked the ball with all of them [too]! I was much younger, so I could keep up with them.”

Now, having watched her grand-daughter grow from a gifted child to one of the world’s best footballers, Coral is overwhelmed at seeing Sam represent Australia.

It’s hard to describe the feeling,” she said. “It’s so much pride and yet she’s just my grand-daughter. But it’s absolutely amazing. 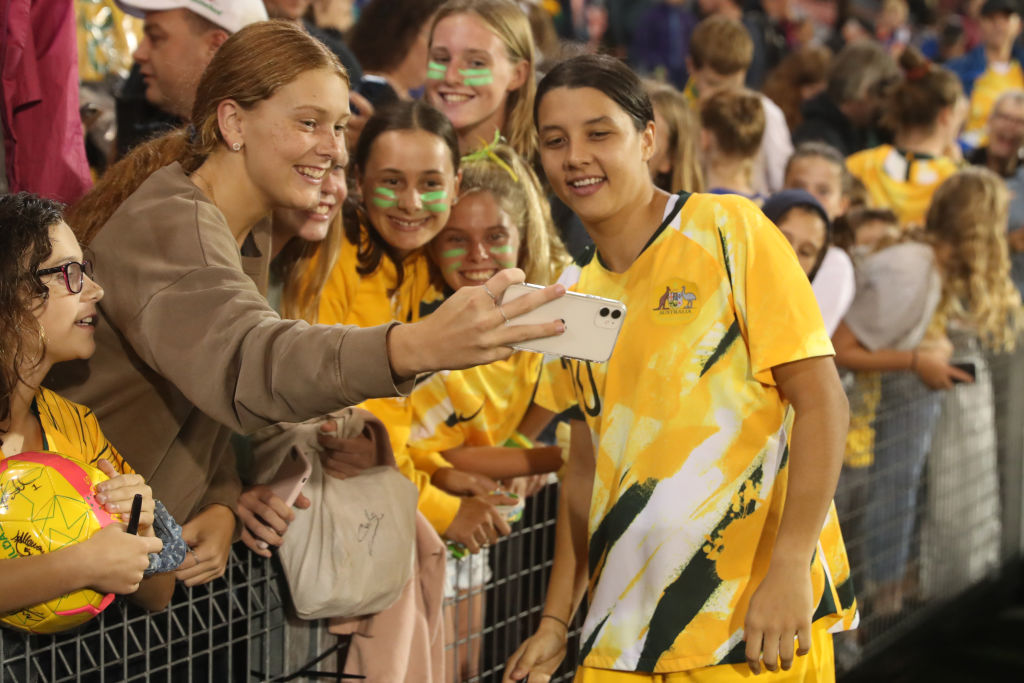 Even though Kerr has played football all over the world in recent years, she still makes time to catch up with her grandmother online, and visits whenever she can.

“I’ve got a fantastic relationship with her,” Coral smiles.

“Nearly every week, she sends me a message, I phone her. I FaceTime with her.

“Whenever she comes home, she’s always here having breakfast. Her favourite breakfast is a pirrata, which is an Indian bread with jam. Or we go out for a coffee or lunch. She never fails to come and see me and take me out.”